It’s no secret among my family and friends that I absolutely love the Marvel Cinematic Universe films. In my opinion there is not a bad film among them, they all set a high standard.

WARNING: This review has spoilers for the movie!

For me what sets Guardians of the Galaxy Vol. 2 apart is the emphasis on family and what people really mean to each other. With this comes emotion and feelings – both negative and positive. The movie really does “hit one in the feels”. Aside from that, this is a Guardians movie so you can count on a visual spectacle along with a healthy does of comedy.
One thing they wisely avoided was showing the Guardians crew all getting along fine without any friction. That would have been boring and unlikely – and too early, this is only the second film. However showing them as hostile and unlikeable would be too much at the other end of the extreme.

In the opening act we find them being sarcastic to each other but each character takes a little time out from the battle to show concern for baby Groot. It neatly shows how they all have a heart while still showing badass-ity.

In the first film we discover that Peter has an unusual heritage and so it is good that we are given a glimpse into Peter’s origin a bit more in Vol 2. Going back to 1980 is also skillful way to weave some well-known music tracks into the story.

Although the progression of Peter finally meeting and getting to know his Dad was interesting, in my opinion it took second fiddle to the other story arcs – those being the redemption of Yondu Udonta and the real source of Rocket’s bad attitude. 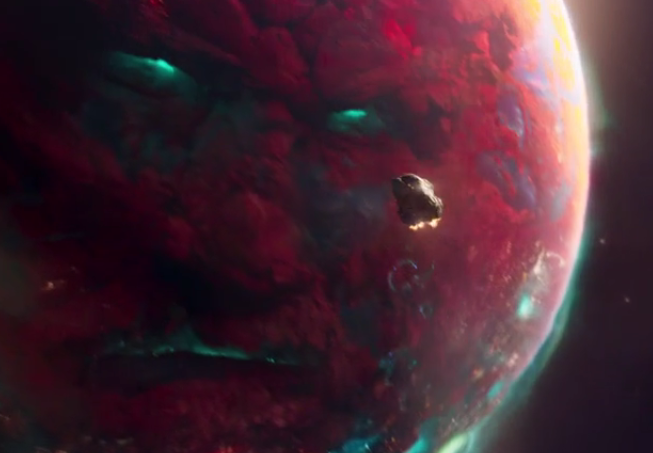 The Rocket arc was good to watch as it involves the two biggest ego’s in the team – those being Peter Quill and Rocket Racoon. Of the two, Rocket is to me the least likable because Peter seems to genuinely want everyone to get along.

It seems something is preventing Rocket from getting too close to anyone. He keeps his a-hole act up almost all the way through until Yondu see’s through it (it is one of the best character scenes by the way).

I’m not going to do a scene-by-scene breakdown in this review but suffice to say the climax is every bit as good as the first movie – but in a different way. In Vol 1 we had an Infinity Stone so the final battle had to be something worthy of such a powerful artifact. In Vol 2 though we have Peter finally realizing how to tap into his celestial heritage to the tune of “The Chain” by Fleetwood Mac. Just hearing those first few simple notes of the track, with all the other sound effects dimmed, was enough to give me goosebumps.
OK, so I’m secure enough in my masculinity to admit I cried at several points during the movie.

I mean how could anyone not shed a tear at Peter’s simple eulogy for Yondu? Certainly not Chris Pratt and I’m sure those tears were not CGI.

There is also a touching scene with the Guardians passing baby Groot to each other, nurturing him in a totally un-self-conscious way while Cat Stevens “Father and Son” is playing.

One thing I noticed is a small dialogue change between the theatrical release and the home release. This being Yondu referring to Rocket as “boy”. In the theatrical release, I’m pretty sure he referred to Rocket as “rat”.
I have a feeling that because “rat” is rather cold and rude, by calling Rocket “boy” (in the same way he does to Peter) it kind of reinforces the father-figure-by-stealth role that Yondu occupies during the story.

All the Guardians get their particular moments with perhaps Drax being a little neglected. He is in one of my favourite scenes though – we get an idea of what’s going on inside his mind when Mantis does an empath touch on an externally calm and reflective Drax …she is immediately overcome by a wave of sadness and loss 🙁

It was good to see Gamora and her sister reconcile. I felt that little arc was a nice counterpoint to Peter and his father. I really like how Karen Gillan delivers the line “All you wanted was to win, I just wanted a sister!”
I really loved some of the ridiculous moments like Peter asking everyone for tape as a fierce battle rages around them and Drax asking if scotch tape would do (despite not carrying scotch tape himself). Let us also not forget baby Groot bringing back a desk in an innocent attempt to interpret Yondu’s instructions.

When all is said and done, I can’t really fault the film that much but if I try then I probably have two niggles:

Did anyone else realise it was Michael Rosenbaum as the voice of the “crystal ravager guy” who appears as Sylvester Stallones lieutenant? The character name is Martinex. Rosenbaum played Lex Luthor in the Smallville TV series. I really like that these well-known actors have been added to the MCU pantheon along with Michelle Yeoh and Ving Rhames as Ravager captains. I can just imagine other actors telling their agents something like this: “listen, if Marvel Studios call tell them it’s an automatic YES.” 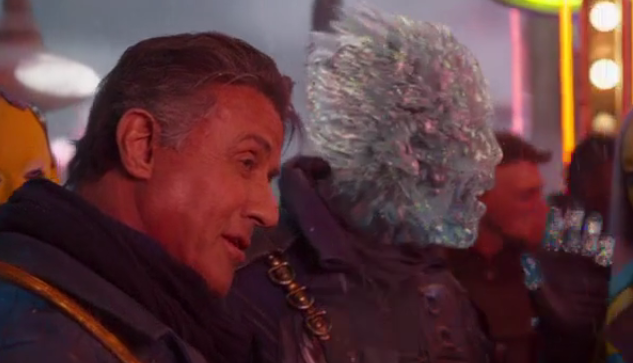 Liked the introduction of the Zune as the next logical step from the squished Walkman (although I would have loved to see him given a MiniDisc player – mainly because I still use the format!).

Cracklin tells him everyone on Earth is listening to them these days which is an ironic reference to the Zune actually losing out to the iPod and being discontinued through lack of sales.

Now one thing about the film puzzles me. I didn’t get is the brief exchange between Peter and Rocket near the end during Yondu’s funeral.
Rocket: “He didn’t chase him away.”
Peter: “No.”
Rocket: “Even though he yelled at him. <pause> I was always mean. <pause> And he stole batteries he didn’t need.”
Peter: <looks quizzically for a moment at Rocket> “Well of course not.”

I didn’t quite get it – is Rocket talking about Yondu or himself? Can someone explain it to me in the comments below?

The post-ending scenes were a delightful treat. Especially Cracklin trying out the prototype fin to control the arrow. It also looks like we’ll see Adam Warlock in Vol. 3? Will he turn out to be a “conceited douche-bag” like his creators?

In the final act of the movie, Yondu tells Peter that he uses his heart to control his arrow – I feel James Gunn approached crafting this amazing slice of pop culture in the same way. A supremely worthy film in the Marvel Cinematic Universe.

2 replies on “Review: Guardians of the Galaxy Vol. 2”

Actually the lines are,
“He (Yondu) didn’t drive them (the ravagers) off”.
“Even though he yelled at them (the ravagers)”.
‘AND (not “I”) was always mean” (meaning Yondu was also always mean).
“And stole batteries he didn’t need”.
This last line has a double meaning probably.
Rocket’s referencing both himself, and Yondu, and how he feels their the same person. Their both things Rocket and Yondu share. Quill was going to be used as a “battery” by Ego (if Quill wasn’t going to help willingly) which gives the phrase a double meaning.
Read more here;
https://www.reddit.com/r/marvelstudios/comments/69z4yh/what_was_your_favourite_line_in_gotg2_spoilers/

Thank you! It is starting to make sense now…