One such unconference is known as “OggCamp” and it occurs every year in the UK. You turn up to face a blank conference schedule and a bunch of post-it notes with a marker pen. To offer a talk is simply a matter of writing it on a post-it and placing it under your preferred slot as below…

There are a variety of talks “slots” so some pople talked for 20 minutes, some for 45 minutes and there was a special slot for “lightning talks” – no, not talks about the atomoshperic electrical disturbances 🙂 they are… well check the image caption below for an explanation.

I went to the most recent OggCamp in Canterbury and this article blogs my experience about it. 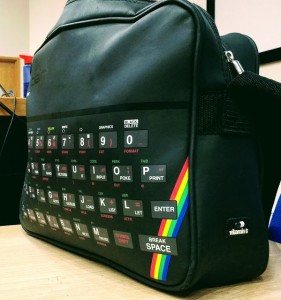 Firstly, I cannot write this article without mentioning the amazing host city of Canterbury – it has such amazing character and some of the streets look like they are out of Harry Potter. There are names like Sun Street, Mercer Lane (a “mercer” is an old English word meaning “trader in textiles”), Butchery Lane and St Radiguns Street. 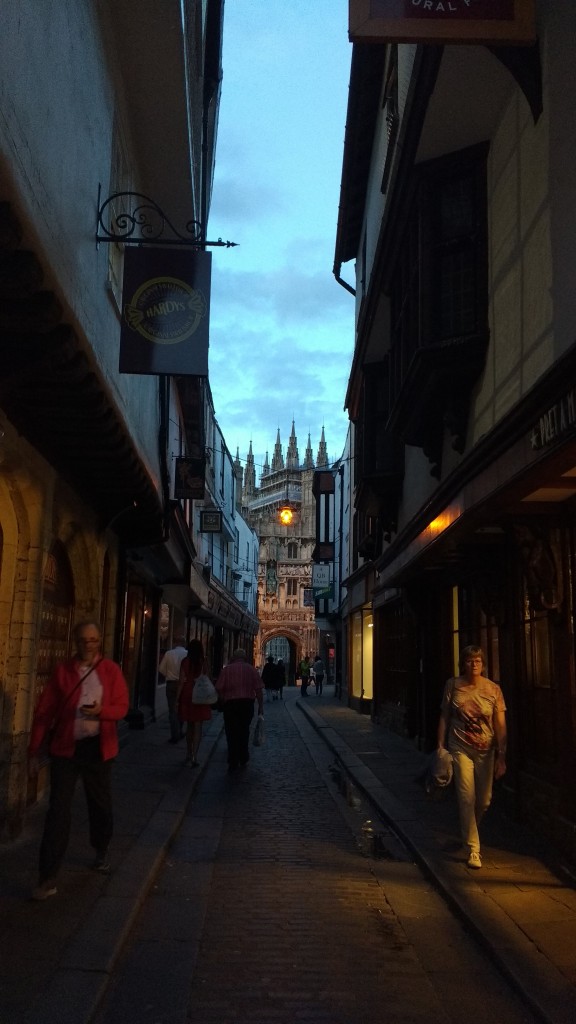 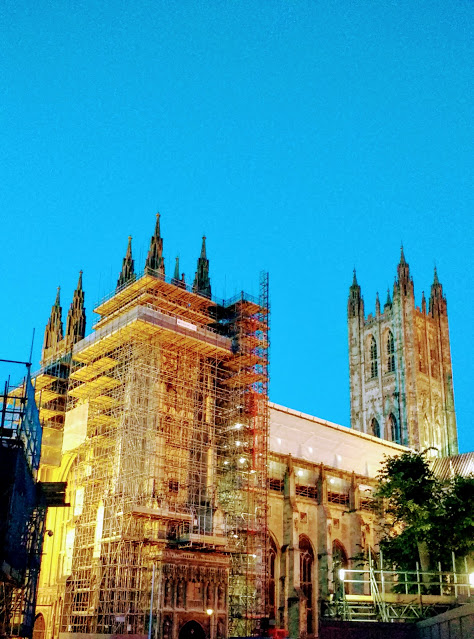 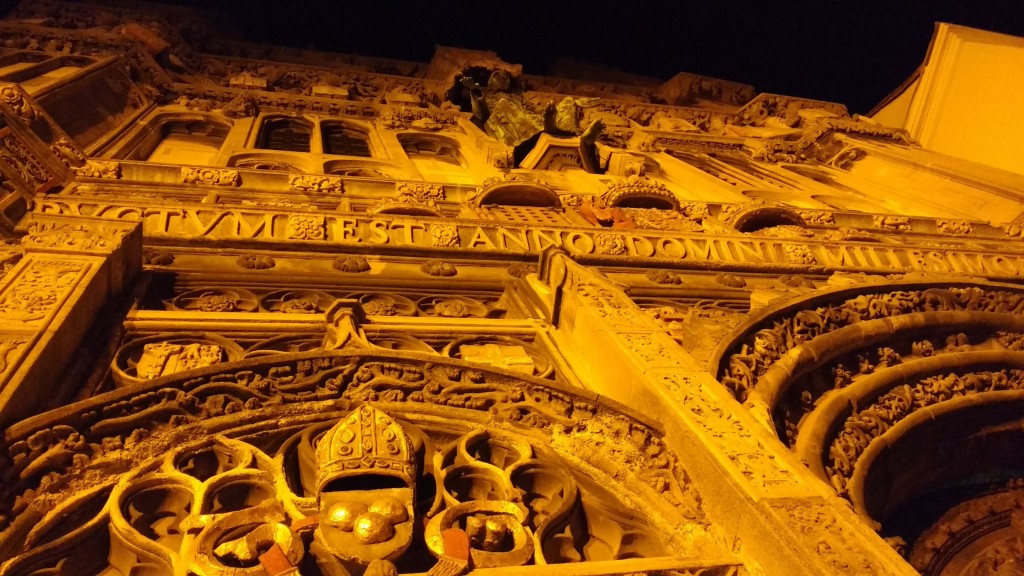 There is the famous Canterbury Cathedral of course (which incidentally seems like a sister cathedral to the one in Winchester) but arrayed around it are various Roman-era walls and forts through and under which modern 21st century roads still run! It was a eye-opener driving into the city for the first time. We had really good weather that weekend and I must have done ~5 hours of walking around the city and venue at Canterbury University. Of note is one metal bridge over the river Stour between where I was staying and the city centre – I have coined it the “Bat bridge” because during the evening I was treated to a frenzy of flying bats making the most of a plentiful supply of insects hovering in clouds under the trees! 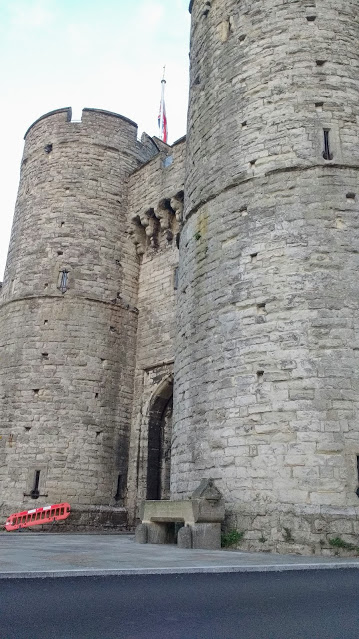 Back to OggCamp – the talks mainly feature on what is known as “free culture” – what that means is any creative work that is shared in an open or free manner. One famous example is the Linux operating system but there are a wide ranging as are the talks.

The stand-out talks to me were one guy who made his own programmable dance floor made up of hundreds of home-brew LED lights with a ping-pong ball acting as a diffuser. Another was a project called matrix.org which seeks to create a two-way bridge between different forms of communication networks (eg. Slack and Telegram). Yet another was on how to keep mentally healthy in a digital world.

The attendee’s tend to be an interesting lot too – there are  children, semi-retired people, slightly awkward middle-class white male nerds and among them are some friendly, pleasant and really likable dudes (hello Tom if he’s reading this! I watched “Logan’s Run” and “Ex Machina” as you recommended). This to me is one of the reasons to go – to be among decent quality people of a like mind who share some deep interest in this amazing free culture movement. The sharing of ideas and cheerful chats over a beer, lunch or just a coffee while waiting for a talk to start.

My talk went well with it being shown in the main auditorium (photo below) so I had a massive projector screen and premium sound system with which to showcase our work on Project Nemo.

The translation project talk was not all my own work. I have to credit the project leader, “DragonSpike” for his support and time in my preparation for the talk – he not only spent time helping me refine my slides but also put together a special game-play video to showcase the translation work of the International Edition. I salute you sir! Check out the project blog for his thoughts and musings on the project.

One observation about OggCamp is that I was encouraged to see female attendees and some non-white folks too – I feel this is important to promote these kinds of events and culture as “open to all” and hopefully to discourage a homogeneous population.

The venue was excellent – it was Canterbury University. All the three talk rooms were close to each other and accomodated everyone who wanted to attend. Each had good working audio-video and there was always a crew member on hand in every talk. Very well-run and professional indeed.

I also discovered that the canteen was opened just for the event and we benefited from a hot meal both days – yumza!

In terms of people numbers, I think I detected a smaller number of folks compared to the last one I went to in Oxford. I would estimate 150 people. I think the location was a factor and the fact that some of the bigger names in the podcast/Opensource scene (eg. Linux Outlaws, LUGRadio) were not in attendance.

So a big, big thanks to John “The Nice Guy” Spriggs, Mark Johnson and the rest of the crew at OggCamp for such an amazing event. <austrian accent>”I’ll be back.”</austrian accent>
All in all a very enjoyable weekend and I want to thank my AirBnB host Paul for making a comfortable stay for me. Check out his property if you’re ever staying in Canterbury.

Yes, another step into the 21st Century for the Chaudhry household has been taken with the addition of a PVR (thats “Personal Video Recorder” for the un-initiated). Check photos below, I’m sure the “fox” in the name refers to it’s sleek understated appearance. Hereafter it will be referred to as “Hummy”.

This amazing little black box records Freeview and Freeview HD and does it extremely well. I never really appreciated the power of easy timeshifting of TV content that these allow. It is so easy to bring up the TV schedule for the next few days and choose to record a show or an entire series – all with one button press. Simples! This means I can watch them back at a time to suit me – case in point: this morning at 7am I watched a documentary on spectacular rise and fall of the Hittite Empire from BBC Four 🙂 It also means that when I’m relaxing with the Missus we can choose to watch something more interesting than “The Kardashians” (btw, I love teasing her by referring to them as “The Cardassians“).

Anyhow, the PVR functionality is not the only thing I bought it for. It can also playback arbitrary digital media such as videos, music and photos. It also has a very decent BBC iPlayer and YouTube “app” built in which is a much more usable effort for a TV form-factor than practically all others I have seen. That said, I’m not giving up my trusty Xbox XBMC systems any time soon. The reason is that even though the “Hummy” can playback hi-def video (e.g. a 3G Avatar blu-ray rip – in mp4 format, not tried mkv yet) and can stream over a network or playback from local USB media – the network streaming is limited to UPnP only. Yes, I can install Mediatomb or Twonky on my LAN Debian server but I already run Samba and NFS already. Given the Hummy runs Linux then why not support these other protocols? They work so well for media streaming dammit (XBMC).

Did I mention that the Hummy runs Linux? Case in point – the HDD is formatted with ext3. This also means it opens up a world of modding potential and a community has of course built up around it over the last 3 years.
If you want to buy one then I would advise looking for a good condition used specimen from an eBay private seller – lots of folks are choosing to go with Virgin Media or Sky to get the premium sports channels and thus selling on their Hummys. Now and again you might see a listing of a Hummy missing the HDD – go for these and you can get a bargain as installing and formatting the HDD is very easy (see blog post above).

OK so a few bad points – HD channel reception is unreliable and I just ignore them even though they look amazing. There are only 5 of them on Freeview HD at present.  Sometimes there is rare signal breakup in SD mode, I have the latest firmware I think so hopefully an update from the Humax will help. I don’t think this is due to my Freeview reception as the Freeview tuner built-in to my TV never had this issue. I would also like some way to turn on and off the TV and Hummy with one button press. I have a Samsung LE32R7 TV so if anyone knows how to do that with the standard remote then let me know. By the way, the 3-digit remote code for this TV I used is 115.